Is Durban the answer?

Dalit activists hope that raising the issue of caste at the Durban conference will pressure the Government to implement protection and affirmative action laws more effectively in favour of the underprivileged. VIR SINGH writes.

WHEN Madhuri Devi complained about the wife beating going on next door, people in her north Delhi neighbourhood dismissed it as an internal family matter. When she went to the local police station, the officer on duty angrily asked: Why is it your concern? Who are they to you?

These key questions will come up before the international community when scores of activists highlight the suffering of Dalits at a major U.N. conference on racism and other discrimination which started on August 31 in the South African port city of Durban.

The Indian government has marshalled mighty arguments as to why caste discrimination should not be discussed at the event, which is titled the World Conference on Racism, Racial Discrimination, Xenophobia and Related Intolerance. Chief among these is the contention that this problem is an internal matter.

Dalit activists ridicule this position, saying this is akin to the case made by the former rulers of South Africa just a decade ago to shield apartheid from outside scrutiny. India rightly rejected this argument, loudly declaring that the mistreatment of black Africans is a global concern. So how can New Delhi use the selfsame strategy to block wider discussion of a problem that affects tens of millions of Indian citizens every single day?

Well, the short answer is that it can and it will. India has more than enough diplomatic clout to ensure that references to discrimination based on “descent” – the compromise term for caste that human rights activists have injected into U.N. documents – are kept to a bare minimum in the Durban conference declaration and action plan. Most Dalit activists know this. The more compelling story, however, is about what they have already achieved.

The beginnings of a global Dalit movement have been traced back to the mid-1970s (see Gail Omvedt’s article, The Hindu, April 2001). The last five-odd years have seen this process gathering momentum. In 1996, the U.N. Committee for the Elimination of Racial Discrimination accepted the contention of human rights lawyers that its responsibilities include monitoring discrimination based on descent. (This makes it mandatory for all governments to file progress reports on actions taken to halt such discrimination). Two years later, activists from across India came together under the banner of the National Campaign for Dalit Human Rights. Last year, New York-based Human Rights Watch presented its highest award to Martin Macwan, a lawyer and Dalit activist from Ahmedabad.

The Durban conference “is a sort of organising event,” says Maja Daruwala, director of the Commonwealth Human Rights Intiative. “There’s been a lot of solidarity, and a lot of churning, a lot of movement. (Dalit groups) are coming together and their demands are being amplified.”

To the charge from some quarters that highlighting abuses against Dalits gives India a bad name in the eyes of the world and is therefore an anti-national activity, Daruwala responds: “It is anti-national to continue with caste discrimination in this country… It is like saying to a woman that she is against family life because she is beaten at home, but she musn’t speak about it outside. You don’t blame the victim for making a noise.”

It is a powerful analogy and, for some Dalit activists, one that offers hope. Years of campaigning for women’s rights, especially at the international level, finally got governments to start doing something to prevent abuses such as wife beating. Similarly, Ashok Bharti of the Centre for Alternative Dalit Media hopes that a frank discussion of caste discrimination at Durban will “bring the issue in focus” once again and pressure the Indian government to implement protection and affirmative action laws.

“Those issues have been purposely kept away from the international forum,” he says. “And this time when it is going to be discussed, the government of India and the nation as a whole is responsible to the whole world community.”

“Our faith has been broken,” adds P.L. Mimroth, a lawyer working with Dalit victims. “That’s why we’re going to the conference.” He says that despite special laws guaranteeing compensation to members of Scheduled Castes and Scheduled Tribes who face atrocities, the government has fulfilled its responsibilities in only a handful of cases.

The United States has repeatedly threatened to pull out if references against Israel are not removed. A group of mostly Islamic nations wants the conference documents to equate Zionism with racism, saying this accurately describes Israel’s treatment of Palestinians. Washington boycotted two earlier U.N. racism meetings, in 1978 and 1983, because of similar disputes involving Israel, a staunch U.S. ally.

The issue of compensation to countries, mostly in Africa, that still suffer from the effects of slavery, presents an even greater challenge for governments trying to hammer out a common agenda at Durban. The European Union led by Great Britain has joined the United States in opposing any mention of “compensation” for the formerly enslaved countries.

“This is a world conference that quite a number of governments would have preferred didn’t happen,” says Mary Robinson, U.N. High Commissioner for Human Rights and chief organiser of the Durban conference. “That’s why as far as I am concerned this is a victims’ conference,” she said in an interview to the Ford Foundation Report. “It has to speak for and listen to the voices of those who are marginalised, excluded, discriminated against and put down because of their color or their background.”

The politically charged atmosphere of the conference has even seasoned U.N. monitors worried. “I have great concerns about what’s going to come out of it,” says Michael Colson, director of Geneva-based U.N. Watch. One problem is that governments have, according to Colson, failed to “de-politicise the debate on human rights.” The other is that the U.N. meeting has become less focussed over time, so that “it’s an open question now as to how wide the conference agenda is.”

The author is an independent journalist. 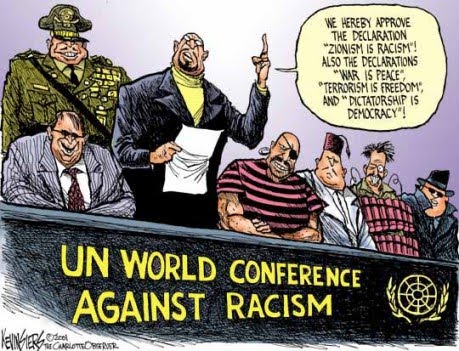