SOAS students call for ‘white philosophers to be dropped from curriculum’

Students at University of London’s School of Oriental and African Studies (SOAS) are calling for white philosophers to be largely removed from the curriculum to better represent the university’s focus on Asia and Africa.

As part of the student union’s “educational priorities” for 2017, students outlined ways to “address the structural and epistemological legacy of colonialism within our university” as part of an initiative that aims to “decolonise” SOAS.

One suggestion was to ensure the majority of philosophers taught on university courses come from the Global South or its diaspora.

The students also said if white philosophers were required, their work should be taught from a “critical standpoint”, to acknowledge the colonial context in which many of their works were written.

Dr Deborah Gabriel, founder of Black British Academics, said the students were clearly seeking to engage in a more culturally diverse discussion that was reflective of the university’s focus, and interrogate the links to colonisation held by the institution.

“A culturally democratic curriculum is something that all scholars, regardless of their ethnic background, should be teaching, given global and national priorities in the 21st century,” she told The Independent.

“Teaching is often based on very narrow criteria and often tends to be eurocentric. These students are calling on scholars to meet the criteria of their role to teach from different cultural contexts, it’s something we all should be doing more of.”

However, she also said decolonising doesn’t necessarily equate to removing the problematic.

“I don’t believe that necessitates removing white scholars because not all white scholars espouse ideas that are narrow in context, a lot of them do engage in anti-racist teaching. Academia often draws on series that are decades old, which is what people often find problematic,” she said.

“If you remove that kind of content from the curriculum, how are you going to critique it? That is what changes attitudes and thinking by looking at past theories and how they have evolved, and looking at what is considered progressive and acceptable now.”

The SOAS “educational priorities” came amid growing calls from students across the UK to rid British universities of associations with colonialism.

Last year, Oxford University refused to remove a statue of Cecil Rhodes from Oriel College over his links with Britain’s colonial past, despite a high-profile student-led campaign.

Cambridge University’s Jesus College took down a bronze cockerel statue, which had been looted during a British colonial expedition to Nigeria in the 19th century, after students asked for it to be repatriated. 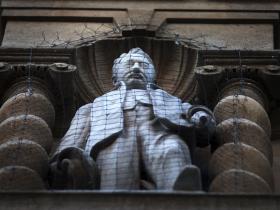 SOAS is the largest European centre for the study of Asia, Africa and the Near and Middle East.

SOAS spokesperson Dr Deborah Johnston, pro-director learning and teaching told The Independent: “One of the great strengths of SOAS is that we have always looked at world issues from the perspective of the regions we study – Asia, Africa & Middle East. Informed and critical debate and discussion about the curriculum we teach is a healthy and proper part of the academic enterprise.”

The Independent has approached SOAS’s student union for comment.